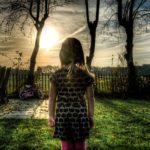 Max felt he had no other choice. When Flo reached out to help him stand he was mesmerized and did as he was guided. The touch itself left him entranced and happier than he had been in a long time.

When he blinked he couldn’t believe his eyes as the house around him transformed into what it used to be. A gorgeous home filled with love, light and laughter and while he should have hoped this effected everyone and helped his family get out safe, his mind was occupied. He instead was enjoying the life of a child, racing through the house after a little girl his age. He heard himself call out “Flower” and noticed the girl turned to smile at him before running further.

It was the first time in fifteen years Max played and felt the true essence of joy. He remembered who he was before all of the responsibilities, all of the obligations and exhaustion from parenting before being a person. He was whole.

Racing through the rooms, around the adults he overheard bartering and being truly happy, he came to an abrupt halt.

Max saw his family through a mirror. Wandering the darkened hallways, struggling to balance on rotted out wood as they approached a door. He panicked, convinced they were leaving him for their own safety but it wasn’t what he wanted. It wasn’t the end he needed at all.

Bending down to his knees he prayed. For the first time in 10 years he spoke to the universe and asked for a solution and he cried. He cried until he had no energy left to kneel and then he collapsed, no longer hearing the whispers or laughter. It was silent.

Opening his eyes again he was surrounded by his family and strangers and he smiled. It was weak but it was there and evident in his eyes. He was saved.