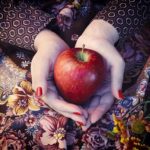 Cole hit the tree, and then the ground, hard at the same time the family inside fell through the cracks, hitting their heads hard, too.

Flo was now their only hope as they were all fighting for consciousness. Flower, finally feeling like she had friends, was determined to keep them well even if they were all afraid of her. Picking five apples from her tree she ran to each intruder, shook them and put the apple in their hand and ran off again.

Lucas came to first, his scents of smell just a bit stronger than the rest and the apple was so deliciously tempting. He tried shaking Helen awake first, then his mother and was delighted when his mother opened her eyes.  He knelt beside her, taking a bite of his apple and pointed for her to do the same.

“No! Don’t eat that! It must be from that dreadful garden.”

“Lucas, when do apples grow?” Helen started to make sense of where she was and heard her mother ask the oddest of questions, making sense only when she saw the apple in her hand.

“And what season is it now?”

It dawned on him then how confusing the last few hours were. Not only were the days going by so quickly but he hadn’t really slept and he didn’t remember when he was last in school. As confused as he was, he continued eating the apple. Helen finally reached him and slapped it from his hand. “Mom said not to eat that. It was probably from Flo and we know not to accept gifts from strangers!”

“But she’s not a stranger to me,” Lucas whined and realized how much like a baby he sounded. His head hurt and he just wanted to go back to sleep. “When’s Daddy waking up?”

Helen and Judy were getting nervous Max hadn’t yet stirred, even with all of the commotion. They would never be able to carry him. If he didn’t wake up then they really did need Cole.

Helen recognized then where there were – at the bottom of the stairs to the other door outside. She made the decision to stumble up them and look for Cole, deciding that somehow Flo got to them anywhere despite the locked door.

Cole was just crawling to the door at the same moment, energized slightly when he saw it open. Helen gasped at the large bump on his head but hurried him in. When they reached her family her father was coming to and they silently grasped each others hands and Judy led the way to the old stairs Helen couldn’t embark before.

Putting Lucas on his shoulders, Max was able to get the boy high enough to reach a stair that held and then offered to lift Helen to do the same. Cole helped with both Helen and Judy and then realized there was no way either man could lift the other.

“Well isn’t this a turn of events,” Cole winked at Helen. You guys get out of here, we’re going to go out back and around again and somehow we’ll meet you in the front.”

“DAD!” Helen yelled as Max fell to the ground. Cole turned to catch him but stopped.

Stop in tomorrow to read Vertiginous