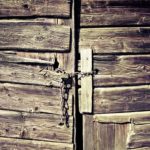 If Helen knew Cole had trust issues she would have protested more. It was her father who suggested securing the door behind them, her mother who doubted his methods and her brother who was just in a hurry to get out of that awful abandoned house. Helen was even more smitten with Cole due to his act of bravery with distracting Flo so they could get free, it seemed ridiculous her father would want to trap him out there with her.

“There’s another way in and if Flo follows us she’d try that door. It’s likely she’d run after the bigger group, especially since we have Lucas so we have to take all precautions we can. We really don’t know what’s facing us in this house.”

Judy nodded, understanding where he was coming from. Helen still argued, “We can’t leave him out there! That’s ridiculous. No man left behind, oh right -you don’t live like that anymore. It’s easy for you to leave the ones you’re supposed to love, it would be nothing to leave someone you barely know. Need I remind you that he saved Lucas. If it wasn’t for him we wouldn’t be as safe as we are. You’re ridiculous!”

As Helen was saying that Max proceeded to find items to block the door, seeming to ignore her yet every reminder of him leaving the ones he did love stung. It wasn’t his choice to leave, that’s what the kids didn’t know. Judy asked him to leave, to give her space and time to reevaluate her own purpose in life. Judy wanted to be the martyr so said nothing.

“Helen, there’s a lot more to every story than you know.” That’s when Cole started banging on the door, screaming for us to let him in. Max wouldn’t be swayed and the banging didn’t last long. Cole was at risk staying in one place, so were the family. “Let’s move,” Max said, grabbing Lucas’s hand. “Kids in the middle, parents at the ends,” he instructed and led the way.

Meanwhile, Cole was looking for another entry when the door wouldn’t open. He hoped that Helen and her family were ok but needed to focus on his own safety. Flo was unbelievably quick for her age and was gaining on him. He had no choice but to turn left and hope he’d be able to find his way out of that beautiful yet terrifying garden.

As he ran, Cole looked for another door into the house that terrified him even more than the garden. In his haste and distracted running he slammed right into an apple tree and fell.