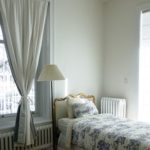 Everyone was occupied yet no one was really doing anything of value. As Helen’s parents made it up the stairs they remained quiet, hoping to hear the sound again but all was silent.

Helen was simply wandering in circles not finding any clues as to where her brother went with Flo, if they were even still together.

Charlie wasn’t comfortable with any part of the situation as she wasn’t sure she’d ever seen this man Frank before. He didn’t seem to be a typical fireman either but she knew practically anyone could volunteer, especially in this town when fires were so rare. She figured if nothing else he’d have more experience and was stronger than her so it couldn’t hurt to have him, especially as they crept through the decrepit house not seeing any of its occupants.

Cole was almost to a window but realized it was far from where he actually planned to go. Looking out he saw only a lawn filled with litter as the crowd was long gone. He thought about shouting for the others but was too scared to even try.

Helen’s parents made it to the top and were surprised to see a child’s room, much like their daughters was years ago. The only room in the house that looked lived in and cleaned, they felt a new sense of dread flow through their spine. “How is this even possible?” Judy whispered.

“We can’t jump to conclusions,” Max replied not realizing how many conclusions they already jumped to, including thinking the house was abandoned. “We have to keep looking.” Judy thought it was strange that if anyone did make it up the stairs they would leave the comfort of a room that looked so lived in.

“Wouldn’t Lucas stay here and sleep if he made it up the stairs?” Judy voiced what they were both thinking. She needed sound, something to keep her mind from panicking more. “Lucas?” she bellowed and heard an echo in response. She wandered to the room’s only window, startled by how clean it was and almost fainting at the sight she saw through it.