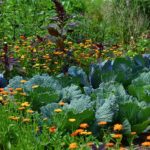 Under any other circumstances this view would have been paradise. A young boy playing with a grandmother in a garden filled with blossoms and vegetables in light so golden it was impossible. Apple trees giving shade to plants and the playful couple who needed a break from the sun. The world was perfect on the other side of window pane yet it made Judy shiver.

The scene, no matter how heavenly it should have been, was horrifying. Everything about it was wrong. The sun couldn’t have been shining, it was – Judy checked her watch – 10:39 PM. Her boy shouldn’t have been awake and both of his grandmothers lived on the other side of the country. And there was no way a garden so beautiful could exist there- behind a house abandoned for decades.

The scene did bring back memories for Max thought. A few years Judy’s elder, he grew up on the other side of the street and vaguely remembered his parents telling him of a garden thriving nearby. Something about bartering for the most delicious of strawberries and apples and the sweetest of honeys from their own hives. They would talk about the mystery of the young family with a single child – Max couldn’t remember if it was a boy or girl and committed to trying to remember to ask his older brother.

It was like Max and Judy were looking into the past, sucked in by a time warp where everything was perfect and inviting. Shaking themselves out of the moment they realized how wrong their idleness was. “Dear goodness, Max, we’ve been doing nothing for 22 minutes,” Judy exclaimed after glancing at her watch again.

Max kept staring though, amazed by the scene that could have easily been from a children’s book describing the Garden of Eden. It was hard to tear himself away yet he knew his concern should be on finding his actual son and bringing him home safely. This certainly wasn’t the date night he had in mind when Judy called him.

Judy broke the moment and turned to see the horror of reality. The house, in shambles, was so very depressing especially since she didn’t know how she would get out of it with her family intact.

Meanwhile, downstairs, Helen too found a window and brought over a bench so she could stretch to see out of the filthy glass. Peering through a spot she saw something she never thought possible. Lucas was laughing and talking to Flo as if it was 10 AM and she got him out of school for the day. Clear as day, Helen was watching sprouts become plants and Lucas’s arms become sun kissed.

Using her sleeve to wipe off more of the window Helen felt she was an intruder spying on a young couple in love. The bench broke, causing her to fall and bump her head on the hard ground, dazing her into the second level of her nightmare. “Where is Cole?!” was her last thought before falling asleep.

Cole found his way to the back of the house and was amazed at the scene before him. He was the only one who could safely get out through a window and into the garden so, after trying to open it, he wrapped his hand in his t-shirt and smashed through it. It wasn’t only the glass he shattered though…