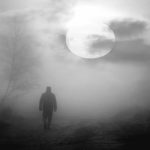 Helen felt the outside temperature dropping, the house offering little to stop the wind, but her own temperature was beginning to soar. So mad that Lucas wouldn’t even have the sense to stay put when he knew of her efforts and expected return, angry that the lady was so convincing. Staying still was not what she was going to do, especially with Cole coming back with help any minute now.

But Cole was lost himself. Turning away from Helen he thought he knew the way back, he also thought that Helen’s parents were close behind him yet he was alone. All mixed up due to the deepening darkness Cole crept forward with his hands reaching all around him in effort to not bump into something.

Helen’s parents were making their way upstairs, slowly and carefully, wondering how it was even possible someone would have so quickly disappeared up the broken steps. They wouldn’t have thought to go up except that they heard a sound coming clearly from above them. They wondered where Cole would have possibly gone and thought Charlie would have gotten help by now.

Charlies’ phone wouldn’t work and when she approached the thinning crowd most people just shrugged and said they had to get home. It took her too long to find someone who admitted to being part of the volunteer fire fighter crew and was relieved when he told her he’d call for his team. Charlie had no reason not to believe him.

With the night quickly rolling in clouds and rain were brought with it and that brought a whole different level of worry for all parties. The roof of the abandoned house left much to be desired and Charlie wasn’t dressed for the chill or the rain as she planned to be home with her story written by now. Journalists, she knew, stayed to the very end and so she began pacing in front of the house, waiting for more help.

Frank didn’t know why he lied. Under pressure he did have a tendency to embellish the truth and he supposed he always wanted to volunteer to fight fires but in reality he was usually the one to start them. He had some buddies he could call but they’d likely be drunk by now so he pretended to be talking to someone on his phone every time Charlie glanced over. After a few minutes he approached her and said they were on their way but he’d get started and asked her to lead the way.