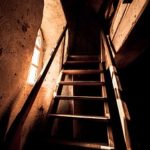 Helen thought she lived a lonely life and maybe she did but it was nothing compared to Flo’s. While she was waiting for her parents to find her, Helen and Flo knew Flo had no one coming for her.

Lucas stirred and looked at his sister, reminding Helen that she even had her little brother. Well, would once Flo let him go. Helen wasn’t sure she should ask for Flo to let him go right now as they seemed so comfortable together and she hated the idea of taking yet another person away.

They all sat, in silence, except for the creaking of approaching footsteps above them. Lucas and Helen began to scream out but it was hard to be loud and not scare Flo. Torn about what to do, Helen decided to trust the old lady and ventured to the doorway leading to a hall not far from where Flo and the boy sat. “How far are the stairs?” Helen asked.

“Just straight down that hallway, you’ll see them but they aren’t much anymore. And don’t trust the railing.”

The only thing Helen did trust was the floor beneath her as she realized it was ground. Although once a finished basement in its day there was no longer flooring, if there was anything before. She realized each room actually held a garden to some extent. This house no longer offered the luxury of a home but was housing tools for survival. Looking back at her brother one last time Helen crept further down the hallway until she reached the bottom of what must have been a structural wonder. In different circumstances she would have joked that they could still be considered a structural wonder but she just wanted out.

Returning to her parents would certainly bring a different kind of lonely life but she couldn’t possibly stay in the house of horrors even if they did take a fondness to Flo. How would she tell Lucas or rather how would her parents tell him. And how would they tell their parents about Flo.

As Helen ascended the stairs a light came on at the top and she saw Cole. “Please, go get a rope. There’s no way even if I could make it up these that the others could.”

“Helen? What are you doing? Who are the others?”

“You’ll never believe it but someone has been living here all this time. She’s with my brother know but he’s hurt and she’s, well, ancient. Where are my parents? We need some strong people, I don’t know how else to get up there.”

“Hang on, I’ll be back as soon as I can.” Helen’s sigh of relief was cut short when he left and she heard more floor boards collapse beneath his weight. She realized there was no safe way for a few people to throw a rope down and haul them up.

Carefully maneuvering back down the few steps she got up, Helen returned to the room she was sure she just left but they were gone. Flo and Lucas were missing.

Join me tomorrow for… Missing Again