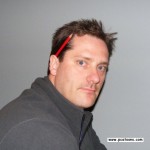 The young blonde limped slightly under the fading daylight as she walked barefoot on the cool concrete of a downtown sidewalk. Her left ankle throbbed slightly as she hurried past a slow moving older couple who walked hand in hand. She clutched her red shoes tightly to her chest with both arms. The left one was missing its heel which was lodged in a storm drain two blocks back.

“It’s him. It has to be,” thought the young woman as she paused in front of a small restaurant. For a moment she pretended to look inside as she glanced back and saw the man she now knew was following her. He had been since she left the coffee shop. She had seen him there often. Always sitting alone as he watched the women while sipping his coffee and pretending to read. She knew he was pretending because his bookmark had been on page ninety-three the last time she saw him there. A slightly handsome man reading a copy of The Catcher in the Rye would peak her curiosity until she walked past the second time and noticed the bookmark in the open page was at the same place as the last time she saw him there. That made her realize she had never seen him turn the page even once.

She recalled her friend’s Facebook post from the night before about the third woman found in the nearby park. They had found the body a week ago lying behind a patch of rosebushes. The previous two had been found in alleyways. Always sexually assaulted and strangled to death with their very own silk scarves. There had been five attacks in total and the last three had escalated from rape to brutal murders.

Her friend had shared an online newspaper article shedding some light on the victims. All of them frequented high-end coffee shops where it was believed that the killer chose his prey. He always chose young intelligent looking women but never the skinny ones.

Glancing down the sidewalk she saw the young strawberry blond man was standing near the front of what looked like an apartment building, hands in his pants pocket as if he was waiting on a cab or something. She knew he was waiting for her to keep walking.

With a dead cell phone in her small purse, she walked and made a quick decision to cross the street and call 911. She would dart into the Word-Nerds New and Used Bookstore. The lady who owned the bookstore, the one that looked like Kathy Bates, would let her use the phone she thought. Ignoring the fact that her bare feet were beginning to hurt, she darted in between parked cars. A small car and a white delivery van with an expired parking meter. Emerging from the other side, she hurried across the street and in a fumble, dropped one of her shoes in the process. After making it to the sidewalk, the young blonde stopped and turned to see where the shoe had fallen. She watched with a blank expression as her stalker emerged from between the same two vehicles. He slowed in his stride, smiling as he picked up the red heelless shoe. With shoe in hand he began to take another step as he turned to see the blur of the oncoming small blue car. The hard impact of the car made the man crash onto the hood, tumbling into the windshield cracking it in the process. His body was sent flying over the roof of the car leaving a trail of blood. He remained airborne for a brief moment before a broken and contorted body with a blood covered face would land clumsily on the asphalt.

Later as the young blond spoke to the police, she would describe the small blue car only she would say it was red. This would not be a mistake but rather she would say that on purpose. She would also remember the woman with the long brown hair and glasses who drove it. She would recall the smile on the woman’s face but that detail she would keep to herself.

Be sure to come back next week for Part 2 by me, Sarah Butland! 🙂