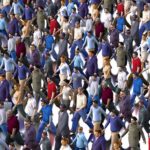 Go to the beginning of this story if you haven’t already.

(For May I am writing a fictional story each day based on the next letter of the alphabet and today’s letter is E!)

Returning to the scene of the… well.. of the crowd as hopefully no crime was committed, Helen went first to where she stood some 35 minutes before and looked for Charlie. Unfortunately the crowd shift dramatically since she had left and neither Charlie nor Lucas were in that area.

“Excuse me,” Helen tried to get someone’s attention. She was finally able to stop an older gentleman to show him the picture. “Have you seen my brother? He was just here and get pushed into the crowd.”

The man looked at her strangely, wanting to ask if she always carried around a framed picture of her little brother but Helen was pushed away so wouldn’t hear him anyway. The mass of people, recently keeping their distance from the property assumed belonging to the abandoned house, forgot their fears and edged their way across the tall, dry grass. Step by step they were all hypnotized, first with the excitement of the rumour of a glowing window and now at the young girl taking pictures from the front step.

The man, Brian, was in attendance for the third time and couldn’t recall ever seeing such a fiasco at the other two rituals. In the past the group would gather, talk among themselves and leave after an hour or so when the temperature was too cold to be comfortable. Tonight he was already well into the second hour and wasn’t bothered by the chill. No one else seemed to be either.

As the crowd crept closer, Helen was pushed with the momentum and was surprised to see Charlie being the source of interest. She was pacing around in small circles seeming to look for something, or someone and Helen realized she could have been looking for a notebook or a person. Panicked she escaped the crowd and ran towards the house, not caring now if it was glowing or not.

“Charlie! Did you see my brother? He was right beside you when I… we got separated.”

“Lucas was right here just a second before. Look, I took a picture  -he was so brave! I thought he’d want me to send you the proof but he must have run off.” Helen was impressed by the picture of her little bro but also thought she might kill him for being so stupid.

“Which way did he go?” Helen looked around, back at the approaching crowd and panicked again. Her brother was so small it would be easy for him to be trampled or missed and it would be all her fault!”

“I don’t know, I… it’s almost like he went into the house but I didn’t see the door open.” The crowd reached them then and drowned out any possibility of further conversation. They were asking Charlie so many questions, too many for her to possibly answer if she had the answers for them, which she didn’t.

The excitement of the night was just getting started.