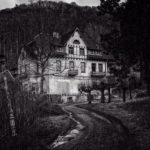 In celebration of completing the A to Z Challenge, and not missing a post, I decided to stay motivated and expand my daily posting but this will be a bit different. Last month each post was random, about words that inspired my passion for writing but now I’m going to write a bit of a story starting with each day’s letter. So today, May 1, 2018 I’m starting with the letter A for Abandon.

The road was crowded with on-lookers who gazed at nothing but a dark house in a deserted field. A single light shone from the upstairs window while the curious stood watching, no one saying a word. And then someone saw it, shouting partly in fear and partly disbelief. A shadow passed by the upstairs glow, dimming it slightly for just a brief moment so it was hard to miss and others wondered if it was actually even seen.

Charlie was known in the village as the gossip so Helen was not surprised she was the one who made the claim. Helen didn’t even want to be there but her mother forced her to take her little brother, Lucas. It was tradition, their mother said, for the older sibling to take the younger to the night of the watch. It was something the people of the village did every ten years on May 1st. This year happened to fall on a Tuesday when their mother worked the night shift and Helen had to babysit. If anything was going to happen Helen wasn’t sure it would be appropriate for her scaredy-cat brother but her mother wouldn’t listen.

Charlie sent shivers down Helen’s spine. She somehow ended up beside her while trying to get Lucas on the other side of the crowd. With Charlie bringing attention to their spot she was forced to put away her phone and pretend to be curious. ‘How mundane’, thought Helen, ‘it’s just an old abandoned house with nothing more to show than broken shutters and rotten steps. Lucas is going to have nightmares and be awake all night. Charlie wasn’t helping.’

And then Helen saw it, just as Charlie said. “Ow! Helen, let go!” Helen had no idea she was squeezing Lucas’ shoulder and quickly took her hand from him. “, let’s go. There’s nothing there and it’s getting late. You’re frozen, too.”

“No, what did you and Charlie see? I want to see it!” He knew he sounded whiny but he waited all of his life for this moment. Yes, he knew he’d have nightmares after, for weeks likely but this would help with his comic books. Lucas was staying until he saw what he came to see.

“I’ll make you a hot chocolate when we get home,” Helen enticed, knowing her mother would strangle her if they left now, especially with offering chocolate before bed. It didn’t work anyway as he wasn’t following her when she finally looked back. She cringed when she did notice the crowd moving into the gap she just created and wasn’t able to see Lucas at all. Helen was done for.