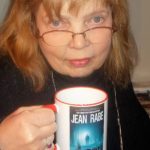 As Sheriff Piper Blackwell rushes to a clandestine meeting with an aging, paranoid veteran who believes spies are trailing his every move, she is caught in a fierce thunderstorm. Pounding rain drums against the bluff, washing away the earth and revealing a grisly secret someone tried to bury a long time ago.

Putting a name to the skeleton on the bluff, and searching for the thief who robbed the old veteran of his life’s earnings, sends Piper delving into the sleepy towns that dot her rural county. Now she’s digging into pasts perhaps best left alone.

Accompanied by Chief Deputy Oren Rosenberg, Piper seeks to expose a truth someone wants to remain forever hidden. The investigation may have started with a thunderstorm, but Piper aims to finish it and find justice. Uncovering fragments of Spencer County’s history could prove more dangerous—and deadlier—than she ever expected.

Here’s my interview with Jean Rabe: 1) Where’s the farthest you have traveled personally and in your books?

I’ve been to Australia—loved it. I took lots of notes while I was there and have used Sydney and Canberra as settings in my fiction. I’ve also been to the Bahamas and Canada—the former delightfully warm (I could live there!); the latter beautiful and chilly. In my books I’ve taken characters to another galaxy, so that’s pretty far. That was in The Cauldron, which I wrote with the amazing Gene DeWeese (NYT bestselling Star Trek author). On earth, I’ve taken characters to Australia, Brazil, Thailand, France, and Vietnam. My current work-in-progress takes them under Rome, Italy.

2) As a sci-fi writer, would you ever want to be an astronaut to experience space first hand? Or would you live on Mars?

I wouldn’t live on Mars. Too dry. Too cold. I’d live in the Bahamas or Tennessee. But absolutely I’d want to experience space. How incredible would that be? Like all the best special effects from the greatest SF movies rolling out before you. I would have to take my dogs, though.

3) Besides yourself, who do you write for?

I write because I have all these plots inside my brain. When I’m not writing…or tossing tennis balls to my dogs…I’m thinking about writing. When I watch a movie or TV show, I think about how I would have instead written a scene. I’ve been writing since grade school. BUT I’d say I write for people who like adventure, action, and lite romance. I’ve tried to write “literary,” and can’t do it well. Pretty words, and they sound good, but I find it boring. I need things that blow up, bullets flying, characters running for their lives. So I write for folks who like those kinds of things. In my mysteries I like to throw in some history, too, ancient or local, something for flavor and something that gives me an excuse to do some research. I love research.

4) You have a lot of history in journalism, did you always want to write?

Yeah, I mentioned starting to write in grade school. I had my first publication when I was in 6th grade, then was published a few more times in high school. In college I worked for a couple of newspapers. I was a news junkie. In a way I still am. Hard news is so much different than fiction. It’s almost bare-bones writing in comparison…facts…leave out your own impressions because you want the readers to draw their own conclusions. Just the facts. I covered a lot of awful things…kids drowning, murders, a big military plane crash…a crazed Vietnam vet terrorizing his neighborhood and killing cats in a Satanic ritual (really…it was bad). Moving to fiction was a good break from the harsh reality of how rotten people can be to each other. Hard news gave me a great grounding in being able to write villains. But I find fictional violence much easier on my soul. I’ve coauthored a few books with Andre Norton. She wrote until she was 92. I think novelists keep at it until their fingers don’t work.

5) What advice would you give someone who is interested in journalism and being an author now?

Journalism…be careful. News coverage isn’t the same anymore. It’s in-your-face because of social media. It’s throwing stories out there often before they’re thoroughly vetted. And it’s news-lite. Except for stories I read in the NY Times, Washington Post, and Wall Street Journal, I often scratch my head. Why didn’t the reporters dig deeper? So…the police had no further comment. So…what? So you go out and get the truth with different sources. Work harder. I’m disappointed with most modern journalists. So I’d advise journalism students to be careful, be thorough, and be better than what is out there right now. And especially be careful because a lot of newspapers and magazines are folding. I would think the job market might be scary.

As for being an author now? Be careful. More than one million books are published a year. You have to compete with that…with the big publishers, the small press, and the self-publishers. Doesn’t mean you shouldn’t write. A writer HAS to write. But you have to get good to compete. You have to be willing to promote yourself, to network, and to not stop. Make sure you’ve got a second source of income to pay the bills, or an understanding spouse who has a job that pays the bills. Go to conferences to meet editors and agents and learn the latest publishing news. Find your niche on the bookshelf, Don’t give up. Never give up.

6) As a regular visitor of museums, which is your favourite and why?

Ahhhhhhhhhhhh…I LOVE museums. Even little ones. Weird ones. Museums by the side of the road that are advertised by a weathered sign. I’ve been to the Smithsonian a couple of times. AWESOME museum. Been to the Australian War Memorial Museum in Canberra…incredible. I taught classes at the Kenosha Public Museum in Wisconsin…really nice little museum, boasts a big dinosaur…actually it’s a complex of three museums. My favorite museum? The National Museum of the USAF at the Wright Patterson base in Dayton, Ohio. Been there four times. Got there when it opened each time, and left as it was closing. It tops the Smithsonian for me. Best Museum.

7) Where do you tend to get your inspiration and motivation from?

I find inspiration in just about anything. I make non-human characters based on my dogs—seeing the world through non-human eyes. I can go to a museum and see an interesting exhibit and turn it into a story. I’m starting to plot my third Piper Blackwell book and I read that Spencer County has the oldest fair in Indiana. So I’m going to set part of my book there. EXCEPT their county fair is over. So I’m going to my local county fair with a notebook and camera. I’ll watch the kids on the rides, the food vendors, check out the cows and such. I’ll take lots of notes and I’ll fold it into the background of my book.

Wow. Tough question. When I was a kid, it was Champion Dog Prince Tom; I had a worn copy that I eventually passed along to my cousin. I remember it fondly. By Jean Fritz and Tom Clute, originally published in 1958, and I had gotten my copy as a later printing through the Scholastic Book Club. Thinking about that book, I still smile.

My other favorites are: Fevre Dream by George R.R. Martin (vampires on a riverboat…so very eerie); The Adventures of Huckleberry Finn, and The Adventures of Tom Sawyer by Mark Twain; The Forever War by Joe Haldeman; Ice by Ed McBain; Purple Cane Road by James Lee Burke (anyone who wants to write needs to read a James Lee Burke book or three); and the Harry Bosch series by Michael Connelly.

9) Does your family read your books? If so, before or after they are published?

My friends read my books; my husband doesn’t read mysteries, which is what I’m writing now, or urban fantasy or SF, which I wrote before my mysteries. He did read some of my Dragonlance books, though. Some of my friends are my “beta readers.” I give them my book ahead of time and they read and look for plot holes. Fortunately for my mysteries, those beta-reading friends include attorneys and a former sheriff. And I have a go-to exceptional nurse who helps me treat my injured characters.

Sometimes. When memories get thick, like when I’m thinking about this big, wonderful dog I had, I feel something—maybe his presence, maybe my imagination. I’d like to think he’s hovering nearby, waiting for me to join him. Then I’ll toss tennis balls for him to chase again.

USA Today Bestselling author Jean Rabe has written 37 fantasy, urban fantasy, and science fiction novels. The Dead of Night, her 38th, is her second Piper Blackwell mystery. She has roughly 100 short stories in print, has edited a couple dozen anthologies, and has edited more magazines than she cares to tally. When she isn’t writing or editing, she tosses tennis balls to her cadre of dogs, visits museums, and tries to find gamers who will play Axis & Allies with her.

You can find my blog

And my Amazon author page

I have a newsletter filled with tidbits about weird news items, pics of my dogs, discussions of upcoming books, reviews of things I’m reading, and writing advice. You can subscribe here.

USA Today bestselling author Jean Rabe has written thirty-seven mystery, fantasy, and adventure novels and one hundred short stories. The Dead of Night is the second in her Piper Blackwell mystery series. She calls them uncozy-cozies, or cozy police procedurals…of which she’s been told there is “no-such genre.” When she’s not writing, which isn’t often, she edits . . . more than two dozen anthologies and more than one hundred magazine issues so far. She’s a former news reporter and news bureau chief who penned a true crime book with noted attorney F. Lee Bailey. Her genre writing includes military, science-fiction, fantasy, urban fantasy, mystery, horror, and modern-day adventure. She shares her home with three dogs and a parrot.

Rabe teaches genre writing courses—at conventions, libraries, museums, and other interesting venues. Her hobbies include reading, role-playing games, visiting museums, tossing tennis balls to her cadre of dogs, and buying books to add to her growing stacks. She lives in central Illinois near three train tracks that provide “music” to type by. Visit her website: www.jeanrabe.com.

GIVEAWAY
There’s a tour-wide giveaway for Cracker Barrel and Starbuck’s gift cards or a little password book. In addition, two lucky bloggers will be chosen at random to win a Starbucks or Cracker Barrel Giftcard. Open to US residents only.

Accolades for The Dead of Night

Jean Rabe always manages to surprise and never fails to deliver the goods! The Dead of Night…Highly recommended!

Jean Rabe writes the perfect mystery! I was kept guessing about everything to the very last word. The girl can write!

In The Dead of Night …a thoroughly satisfying and complex novel with deeply realized characters and beautifully vivid writing.

3 Responses to “ABOUT THE DEAD OF NIGHT”