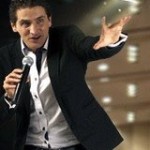 Let’s welcome Justin as he asks the questions I’ve been asking myself lately and I’m sure everyone has asked themselves at least once in their young lives.

We are born and we will die—I make my living out of stating the obvious.

Sometimes things are so blindingly obvious, they blind us. Or we blind ourselves because they’re scary. Don’t get me wrong, I’m not scared of death—as long as it doesn’t happen to me. On the bright side it’s our last big deadline, and we get to meet it lying down! So, we are born and we will die. That is true of us all. The only difference is what comes in between: that little dash on our gravestones. I call that dash Quest, Inc. Can you buy a new life?

. It’s the journey that each of us takes to fulfill our potential. Or not. See, until we decide what our quest is, we’re living in “whatever land”. It bothers me how much young people use that word “whatever”. Like this character in my book Quest, Inc.:

George raised his brow and nodded. “Sounds like you know what you don’t want. So, what do you want?”

“The single most important question of your life and you come up with, ‘Whatever.’”

She took another sip of her drink.

“Whatever land”, that awe-inspiring place where people are always wondering: “Is this it?” And of course the answer is Yes! That’s it. It is what you made, or didn’t make. It reminds me of two guys on a building site. They pull out their lunch. The one looks down. “Oh no!” He says, “not marmite again, I hate marmite.” The other says, “You know we’ve been working together for four years, every day you pull out your lunch and say the same thing, ‘ah no, not marmite, I hate marmite.’ If you hate marmite why don’t you get your wife to make you something else.” “Because,” the guy shrugs, “I make my own sandwiches.”

The first step to eating the lunch you want is knowing what you want for lunch. What is your quest? It could be anything, building a business, creating a loving family, losing twenty kilograms, solving world hunger, writing a book. It’s different for everyone. If you’re depressed, maybe your quest is just to wake up one morning with joy in your heart. If you’re heading into retirement maybe your quest is to mentor a student through to employment. Something happens when you state the goal, it’s like starting the engine to a car; it’s the first step out of inertia. Better still,write it down. Ask yourself: What do I want? And then commit it to paper.

My introduction to the power of writing down goals happened when I was fifteen years old. You know those kids who didn’t have to work hard and got an A+? I was one of those kids who had to work really hard for my D-. I had never really achieved anything. I had a heard about the Junior City Council: a delegation of representatives from schools around the city. Councilors were appointed by the principle of their school. They then voted one another into executive positions. What I wanted more than anything was to become Junior Mayor. That was about as remote as getting a date with Charlize Theron. Particularly as back then nobody knew who Charlize was. I had no track record, I’d never shone at anything but deep down inside I was convinced that I had what it took and given the position I would be able to do great thing’s for the cities youth.

I’ll never forget the night I sat on my bed with an old pad of paper and wrote down my quest to become Junior Mayor of Johannesburg. I got so excited thinking about the good I believed I could do in the position. I could see myself in the mayoral robes and chain, I fantasized about giving speeches at National conferences. And most importantly I wrote down a plan about how I would do it. There was a lot to be done, with plenty that could go wrong along the way – for one thing, after giving me a warning for rowdy behavior, the principle had taken to looking at me like a side dish he hadn’t ordered. But I refused to let anything stand in my way. When I wrote down that goal I became committed. That same year I was elected Junior Mayor of Johannesburg. It had all begun with taking a fantasy from my head and putting it down on a pad of paper.

So, what is your quest?

Quest, Inc. Can you buy a new life?

will change but if you have no idea where you’re headed, it could be off a cliff, or just to your last deathbed gasp: “Was that it?” See, it’s not so much what we get by achieving our goals but what we get by having them. Research shows that people with goals are significantly happier. Why? Because they wake up with purpose, with mission, with the tantalizing sense that they are headed towards something more. There is a neurotransmitter in the brain stimulated by drugs like cocaine, called dopamine. Dopamine is emitted naturally when we think about the exciting things in our future. In my book Quest, Inc. the narrator describes it like this:

Robert had written up an exercise program. That had been easier than he expected. He’d actually enjoyed it, felt a twinge of excitement as he planned the route to a new body.

I have had many mini-quests over the past few years but my one, big, major quest has been my book Quest, Inc. I have spent countless hours learning from the experts how to write a novel (it’s my first!), plotting the stories, writing, getting feedback and rewriting and rewriting some more. I write on the weekends, on holiday, at night, in the early morning and just about whenever I’m not out speaking and training. I haven’t got paid a cent for the thousands of hours I’ve put in. When you’re driven by a compelling quest, you don’t have to get paid, at least not initially. You get paid in the joy of doing it and, yes, in that delicious natural-cocaine dopamine-high that comes when you dream about giving something of value to the world. “But,” you say, “after all those hours, what if it’s not a success?” It’s already a success. The success is in having a quest. So, what’s your quest? On his deathbed, one of the characters in Quest, Inc. puts it like this:

Don’t wait to drive your life, because it’s not long before they take away the keys.”