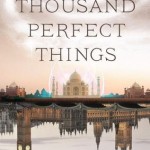 In this epic new work, the award-winning Kenyon, whose work has be compared to Larry Nivens and Stephen R. Donaldson, creates an alternate Earth in the 19th century. This Earth is ruled by two warring factions—scientific Anglica (England) and magical Bharata (India).

Tori Harding, a Victorian woman, whose heart aches to claim the legendary powers of the golden lotus, must leave her reasoned world behind and journey to Bharata. In pursuit of the golden lotus, Tori will be forced to brave its magics, intrigues, deadly secrets and haunted places, to claim her destiny and choose between two lovers in two irreconcilable realms.

As a great native insurrection sweeps the continent of Bharata—Tori will find the thing she most desires, beautifully flawed and more wonderfully strange than she could have ever dreamed.

Praise for A Thousand Perfect Things

“This has become my favorite of all Kay Kenyon’s books. The science-driven men of Anglica have constructed a marvel of engineering-a bridge that crosses the ocean-but they don’t understand the mystical forces they’re facing in the dangerously seductive country of Bharata. As usual, Kenyon offers flawless world-building and a diverse cast of characters driven by conflicting and wholly believable desires. This is a rich, gorgeous, and marvelously detailed tapestry of a book.”
— Sharon Shinn, Author of Troubled Waters and Royal Airs

“Kay Kenyon has once again created a world into which one blissfully disappears, replete with magic and monsters, romance and reigning dynasties, set upon the fragile social scaffolding of mid-nineteenth century England. The story is, literally and figuratively, a bridge between the mystical and the very real, with a young heroine who a delivers a deliciously vicarious ride. Brilliantly told with elegant yet occasionally jarring prose, A Thousand Perfect Things is a masterwork from the mind of one of our best authors of compelling alternate realities.”
— Larry Brooks, Author of Story Engineering

Excerpt from A Thousand Perfect Things

Tori’s stomach clenched as she now saw before her a woman in a green sari facing away. Streaming out from the woman’s head, her long hair was writhing in an impossible way, as though alive. The sight both sickened and fascinated her. The woman walked slowly away in a disconcerting gliding motion. Afraid yet intrigued, Tori followed the woman to the garden wall.

“Come, beti,” the woman whispered, though the whisper was in Tori’s ear, not fifteen yards away.

They stood regarding one another. Slowly, and to Tori’s relief, the long hair came to rest around the woman’s shoulders. It seemed to Tori that the frantic hair warned of discontent, and must put Tori on warning that the apparition could do violence. Suddenly, alarming noises issued from behind the zenana wall–squealing almost at the limits of hearing. Filaments of the woman’s hair rose again.

“They cannot hurt you, or even see you, beti.” The voice was a breath in Tori’s ear, but the woman’s lips were not moving.

“Why are you trying to scare me?” she managed to say, her voice gone pinched and high. The squealing behind the door grew louder. At that, the woman slammed a fist against the wooden door, all but shattering Tori’s resolve to stay.

“They do not wish for me to be long gone.” Bits of dust fell off the door.

Tori looked down to find that the woman’s feet were not actually touching the ground. Merciful God. Tori could not move, nor swallow, nor keep from staring.

The whisper again: “Jai will be showing you where to go. You should be trusting only him, beti.”

The squealing resumed, louder now. The woman placed her hand on the latch of the door, and as she did so, her hair swept in that direction.

Tori did not want to see what was on the other side of that door.

She looked desperately behind herself for her companions, but she was alone. As she turned back to locate the woman in green, all that remained of her was a shred of forest-colored sari sliding through a crack in the door.

Kay Kenyon is the author of eleven science fiction and fantasy novels, including A Thousand Perfect Things. She is the author of the critically acclaimed science fiction quartet, The Entire and The Rose. Bright of the Sky was among PW’s top 150 books of 2007. The series has twice been shortlisted for the ALA Reading List awards and three times for the Endeavour Award. Four of her novels have been translated into French, Spanish and Czech. Along with her novels Tropic of Creation and Maximum Ice, two of the works in the quartet received starred reviews from PW.

Open only to those who can legally enter, receive and use an Amazon.com Gift Code or Paypal Cash. Winning Entry will be verified prior to prize being awarded. No purchase necessary. You must be 18 or older to enter or have your parent enter for you. The winner will be chosen by rafflecopter and announced here as well as emailed and will have 48 hours to respond or a new winner will be chosen. This giveaway is in no way associated with Facebook, Twitter, Rafflecopter or any other entity unless otherwise specified. The number of eligible entries received determines the odds of winning. Giveaway was organized by Kathy from I Am A Reader, Not A Writer and sponsored by the author. VOID WHERE PROHIBITED BY LAW.