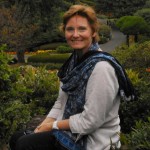 Becoming a writer started with a three year stay in England. It was there that I meet a group of talented and totally honest group of eclectic writers. I was referred to as Scheherazade because I liked to write page turning stories. When I came back to the States I continued to write for kids.

I started to see stories everywhere and learned that networking with other writers was electrifying. I found being part of a critique group, and brainstorming with others inspiring. As a reviewer for School Library Journal for five years I got to read cutting edge books and to see and hear what was going on in the publishing world.

Joining SCBWI (Society of Children Book Writers and Illustrators) introduced me to talented writers and extraordinary conferences. There’s something about the artistic experience that flourishes when you surround yourself with good books, like-minded writers, and a passion for storytelling.

The Ghost, the Rat, and Me
Robyn Gioia
Campbell (Bell) Olson’s best friend Temple was killed in a car accident. She thought the pain would last forever. Then something unbelievable happens. Temple returns as a ghost. When Bell signs up to run for eighth grade president, a dead rat with a mysterious note attached to the neck appears on her doorstep. She knows it’s her obnoxious opponent, the most popular guy in school, but can’t prove it. She and Temple team up to catch the person behind the mysterious trail of clues. But it’s not long before Temple realizes things aren’t as they seem and he can’t tell Bell. He knows it is stop the culprit or something catastrophic is about to happen.

When I discovered that America was keeping a historically documented well-kept secret, I set out to teach the kids through my controversial history book, America’s REAL First Thanksgiving, St. Augustine, Florida, Sept.8, 1565. It reveals how America’s real first Thanksgiving took place 56 years before the Pilgrims. This book was featured on the front page of the USA Today Life section.

Thanks for taking over to tell us your story, Robyn.
And thank you for reading!