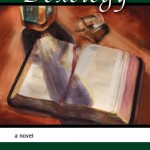 Please enjoy this excerpt from the literary novel, Doxology. Then read on to learn how you can win huge prizes as part of this blog tour, including $450 in Amazon gift cards, a Kindle Fire, and 5 autographed copies of the book.

Sunday is Vernon’s wash day. And though he has enough money to buy a dozen of the nicest washing machines known to man, Vernon Davidson washes his clothes by hand. For his washing, as for everything else Vernon does, he has a system. As far as Vernon is concerned, his clothes come out looking cleaner and newer than any machine could get them. He wears all of his clothes during the week according to the schedule he has printed in black marker on the insides of the garments. Five sets of work clothes, three sets to rotate before or after work on those five days, and two sets for the weekend. When he wakes each Sunday and slips off his underwear, his drawers and closet are completely empty. If the morning is cool, Vernon goes out and washes his clothes wearing only a cotton robe. But if any warmth hangs in the air, as it often does by the first of March, Vernon goes out in the yard and washes his laundry naked.

Vernon wakes on the first Sunday in April with a nagging headache. He rubs his temples and lies thinking about Leonard. Finally he shakes it off, opens his eyes and stands up. Though spring is well along, a touch of chill is in the air, so he puts his robe on after kicking his underwear into the giant laundry pile, then goes into the kitchen to start breakfast.

For the last dozen years, since he quit going to church, Vernon starts Sunday mornings with a large breakfast of eggs, bacon, French toast, orange juice and coffee. He could have started working Sundays years ago if he had wanted, just to fill the time, but he never has. Sunday is the only day of the week he eats anything besides fried bologna and cheese sandwiches, which he makes twice a day for himself in the same greasy cast iron skillet he uses on Sundays to make his breakfast.

Once the coffee is going and the bacon and eggs, Vernon walks back into the bathroom. Though he usually doesn’t stop by the mirror in the hallway, this time he does. He turns and looks at himself face on. He opens his bathrobe, stands and flexes the long, corded muscles that still run through his torso after sixty years, pats the flat part of his stomach. In the bathroom he grabs a comb, comes back to the mirror and quickly whips it through his long gray hair. He works the comb through, notes again that he hasn’t lost a single strand. Then he combs through his thick gray beard and fluffs it just a bit. He smiles at himself wide, taps his perfect teeth. Better to turn gray than turn loose, he says to the reflection as he pulls on a chunk of his hair. I’m still looking good.

He goes back to the kitchen, takes his squeezable jar of yellow mustard from the refrigerator and squirts a quarter inch of the oily yellow substance into a glass. Then he unscrews the lid of a bottle of Jack Daniels, smells it out of habit, winces, and pours in three fingers’ worth. His stomach gags, as it often does, with the first sip. Vernon lowers the glass, catches his breath, and raises it again. This time it all goes down, and the bitterness radiates out through the hinges of his jaws, his stomach, the top of his head. He slams the glass down on the counter, proud of his effort. After a minute the sour taste goes away, and the whiskey begins to do its work on the rest of him. Everything starts to settle. By then the food is ready, and he slides it all onto a plate, pours a large cup of coffee, and sits down to eat.

By the time the food is gone, the good part of his drink is leaving him, as it seems to do earlier and earlier these days. He goes back to the kitchen for another round of the whiskey and mustard. Then he clears the dishes from the table and, with the sink already full, puts them on the counter. “Leave those for the cleaning woman,” he mutters to himself. He eyes the mess in the rest of the house, papers all over, dust on the floor. Vernon likes to pretend.

Back in the bedroom, he picks up all the clothes and places them in the proper piles. Then he carries them all to the rear door, steps outside, and looks across the creek running through his back yard. Vernon smiles. Everything in his yard is the deep, rich green of spring, and not a weed is anywhere to be found. He’s thought about planting flowers once or twice, something to break up the single note hue that soon enough will turn to brown. But, though everything outside is as it should be, nearly all color is missing from Vernon’s yard.

Nevertheless, things are looking good on his side of the creek. On top of that, a few days earlier someone showed up while he was at work and cut the grass at the Baptist church camp on the other side of the creek. Funny how things work out. Vernon sold that property to the church fifteen years ago, back when he was still part of it.

The arrival of spring means a lot of things. It means the mill where he has worked for thirty six years will bring some young guys in, guys Vernon will harass into doing his work for him. It means the bullfrogs that sing their throaty songs as he lies in bed at night will be back in tune any time now. And it also means Easter, and the Baptists he loves to terrorize will be showing up for lunches on the grounds at their camp across the creek starting next Sunday afternoon. And when they come, the men to stand around and talk about fishing or hunting over fried chicken and beans, the women to compliment one another on their new dresses, the boys to run around the playground and wear grass stains on their new Easter pants, Vernon will be there washing his clothes in the yard, in all his bearded, gray haired glory, as naked as the good lord made him. And that’s exactly what he’ll say to whichever one of those do-gooder men comes to the edge of the creek to complain about it in response to the shrieking of their children or the pecking of their wives.

“This is the way the good lord made me!” he shouts into the air, shrugs off his robe to the ground and spreads out his arms. Practicing for the first confrontation of the season. He can already picture the guy standing over there, usually Jerry Reeves or Tom Staples or Donnie Lyles. One of them is who they usually send. He just loves to see the looks on their faces as they stand there in their Sunday best, striped or polka dotted choke chains hanging from their necks, trying to look him straight in the face and not to let their eyes wander downward.

They always say the same things. “Come on Vernon, it’s kids over here. Come on Vernon, put some clothes on brother, my wife…” Sometimes they even try to guilt him. “Look at you brother Vernon, look what you’ve turned into, you orta be ashamed of yourself.”

But Vernon Davidson cannot be guilted. Not after what he’s been through. And certainly not after the four or five glasses of whiskey and mustard he’ll have in him by Sunday noon.

As part of this special promotional extravaganza sponsored by Novel Publicity, the price of the Doxology eBook edition is just 99 cents this week. What’s more, by purchasing this fantastic book at an incredibly low price, you can enter to win many awesome prizes. The prizes include $450 in Amazon gift cards, a Kindle Fire, and 5 autographed copies of the book.

All the info you need to win one of these amazing prizes is RIGHT HERE. Remember, winning is as easy as clicking a button or leaving a blog comment–easy to enter; easy to win!

To win the prizes:

The tour blogger who receives the most votes in the traffic-breaker poll will win a $100 gift card. When you visit Novel Publicity’s site to fill-out the contest entry form, don’t forget to VOTE FOR ME.

About the book: Fathers, sons and brothers reconnect over tragedy in this blue-collar Southern tale of love, loss, and the healing power of community and family. Get it on Amazon or Barnes & Noble. About the author: An arborist by day and a novelist in every moment he can steal, Brian makes up stories from the treetops. Visit Brian on his website, Twitter, Facebook, or GoodReads.

3 Responses to “Please Join Me on a Doxology Tour”