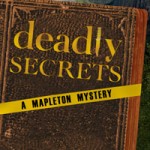 I met Terry through her offer of a review ebook copy of Deadly Secrets on Facebook which both taught us a lot. In my haste I didn’t realize I was about to accept the Barnes and Noble Nook “gift” version and quickly discovered their ebooks are not available for download in Canada and, so appears, their customer service lacks in this area as well. Terry then tried to get a refund for the gift she gave me and finally, after some waiting and games, was able to get it resolved.

Short bio: Terry Odell was born in Los Angeles, moved to Florida, and now makes her home in Colorado. An avid reader (her parents tell everyone they had to move from their first home because she finished the local library), she always wanted to “fix” stories so the characters did what she wanted, in books, television, and the movies. Once she began writing, she found this wasn’t always possible, as evidenced when the mystery she intended to write rapidly became a romance. Now, she writes both romantic suspense and mystery. Her titles include the Pine Hills Police series, the Blackthorne, Inc. series as well as several stand alone novels: Nowhere to Hide, What’s in a Name? The first book in her new Mapleton Mystery series, Deadly Secrets, is now available from most e-tailers. Thanks, Sarah, for inviting me to your blog.

You started writing by improving characters/ tv shows like MacGyver and Highlander. What shows catch your attention now and, out of all your favourites, what is one suggestion you have for it?

I have to be honest. I stopped watching much television. I’d rather be reading or writing. I do record shows so I can zip through them. Right now, my DVR records CSI (Las Vegas), NCIS (both series), Castle and a couple other related shows—and when I watch, it’s usually to see if I can pick out all the mistakes in police and forensics. But mostly I watch the Food Network and Cooking Channels shows. Love Iron Chef America and some of the other competition shows. I’ve been so busy writing my own books with my own characters that I rarely think of “fixing” these anymore.

certainly is a mystery but with a touch of romance. Do you think you’ll always include a love story or two in your stories?

Most certainly. The only stories I’ve written without romantic elements were police procedural short stories, where a veteran cop does pair up with a female rookie, but there’s no relationship. I imagine if I continue that series, I’ll find a woman for him or a guy for her—or both. The basic difference between romantic suspense and mystery is that in a romantic suspense book, you’re expected to wrap up the relationship at the end of the book (but I didn’t care about that rule, so I brought Randy and Sarah back as the protagonists in Hidden Fire, even though they’d had their promise of a HEA in Finding Sarah). In a mystery, you can draw things out over several books, and I expect I’ll be revisiting Gordon and Angie, and even Megan and Justin in future Mapleton Mysteries.

You mentioned that your daughters have pointed out that your first mysteries were actually romance. Do you have any other children? And do they still all love your writing no matter what genre it takes?

I have an older son. He doesn’t read my books, although he did the cover for What’s in a Name? and designed my original website, and takes my head shots. He’s an accomplished photographer. As for my daughters loving my writing…they wouldn’t dare say otherwise. I just assume they’re being honest.

In your most recent blog (January 2, 2012) you mention a disagreement between you and your publishers about product placement. I think like you do, that it adds some sense of familiarity and is so briefly overlooked but adds to the story. Why do you think they discourage it?

They’re afraid of being sued. Some companies don’t want their products mentioned or associated with books for whatever reason.

On a side note, I read in writer’s magazine (Writer’s Digest) that branding was ok as long as it wasn’t slander. If you’re using something like “the character drank Pepsi and loved it!” – permission isn’t needed.

Again, that’s the publisher’s decision. Clearly, they’ll never let you say something bad about a product, but they make the rules, since they’re publishing the book and would be held liable.

Speaking of your blog, you seem to update very regularly; how do you find the time?

I make the time. And I really don’t blog that often, although I have 5 posts a week. However, my writing-based posts are on Mondays and Thursdays. On Tuesdays I host guests, and on Wednesdays I share a recipe, often provided by readers, and on Fridays I share pictures. Writing my posts makes me think about writing, and it’s another way to get into the writing groove, especially if work on my WIP has hit a wall.

Since Facebook, do you find you’re finding more fans or simply discovering new authors to read?

I’m finding authors, and I certainly hope some of them are finding me. But realistically, I’m sure it’s a tiny fraction of my Facebook “friends” who actually go out and buy my books.

I love your “Behind the Scenes” idea where you discuss how you came up with your idea’s/ characters stories. Do you have one planned for Deadly Secrets? If so, want to share a sneak peek of how you finally were able to focus on a mystery?

Sneak peek just for you and your readers. When I started writing Deadly Secrets, it was going to be a romantic suspense: Justin and Megan’s story. But then Gordon Hepler showed up (and he’s named for a real life person I know who begged to be a character in one of my books) and he took over. Once he hit the page, it became a mystery, although for a few draft chapters, I toyed with hooking him up with Megan.

Terry, do you prefer reading the best selling author you love or discovering a new-to-you author who’s book you can’t put down?

When you offer review copies do you always get a review back? Are they always as glowing as mine was and how do you deal if you ever get a not so glowing one?

No, I don’t always get reviews. I think I gave away 30 or 40 free downloads of one of my books and maybe saw 5 reviews. I never know if the recipient hasn’t gotten around to reading it yet, or if they’ve posted their review on their own site and didn’t tell me, or if they didn’t like the book and felt it would be inappropriate to post a negative review. Or (and this is my guess) they just want to get free books. I’ve learned to accept that everyone has an opinion, and not all reviewers are going to like the book. I, for example, would be hard-pressed to write glowing reviews for some genres of books despite the fact that they’re humongous best-sellers. As a writer, it’s hard to turn off the internal editor, so things that don’t bother a “non-writer-reader” often bug the heck out of me.

And lastly, is there a question you always wanted to answer in an interview but never been asked?

Sure. What’s the author-reader relationship? After all, we write hoping people will read and enjoy our books, but we work in relative isolation. I love when readers take the time to email me and tell me they’ve enjoyed a book. As a reader, the nicest thing you can do for an author is to let them know they’re appreciated. Drop them an email, or comment on their blog, or write a review, or tell other people you liked the book. There are really only two things that sell books. 1. Writing a good book and 2) Word of Mouth.

As always, thanks for reading, and be sure to keep reading to enjoy some extra goodies and/or get in touch with Terry directly,

Blurb:
Mapleton, Colorado’s police chief, Gordon Hepler, would rather be on the streets than behind a desk, but he promised his late mentor he’d accept the position. And to Gordon, a promise is a promise, even if the person you made it to isn’t around anymore. However, doubts creep in, and he wonders if he was shoved into the job because his mentor thought he couldn’t cut it on the streets.
Everything changes when a fatal traffic accident well outside Mapleton seems connected to the elderly Rose and Sam Kretzer, two of Mapleton’s most beloved citizens. When Gordon ties the car accident to a grisly murder in Mapleton—the first anyone in town can remember—he’s afraid he’s into more than he bargained for.
The arrival of Megan, the Kretzers grown godchild, and Justin, their grandson, add to Gordon’s troubles when Megan is mugged and someone breaks in and ransacks the Kretzers’ home. Gordon’s fears that he’s in over his head are realized when his investigation seems to link the Kretzers to a Nazi war criminal. Can he work with the big-city detective brought in to assist? Will he be able to solve the crime without revealing the secrets of his citizens?

Excerpt:
Gordon stood inside the doorway, taking in the scene, finding the detachment needed to keep from smashing his fist through the wall.

Betty Bedford was secured to her wooden desk chair. Her ankles were crossed in front of her, bound with duct tape. Another wide belt of tape went around her torso. Her arms, taped at the wrists, were behind the chair.

A nuisance, a pest, a thorn in his side she might have been, but she was a vital woman, barely into her sixties. She should have been pestering him for years to come. Her bright, eager eyes, now filmed with death, stared into nothingness.

He took three deep breaths, counted to ten, and called out to Doc Evans, who doubled as the city coroner.

Doc straightened from his crouch next to the body. “She’s been murdered.”

Yeah, that was a fairly easy call. The slit throat was a dead giveaway. Kind of hard to do yourself when you were tied up. Or tie yourself up afterward. And her shop was in ruins. Heaps of clothing in the center of the room, all her quirky ambience pieces broken and strewn helter-skelter. Cardboard boxes, contents spewed, lay upended amidst the debris.